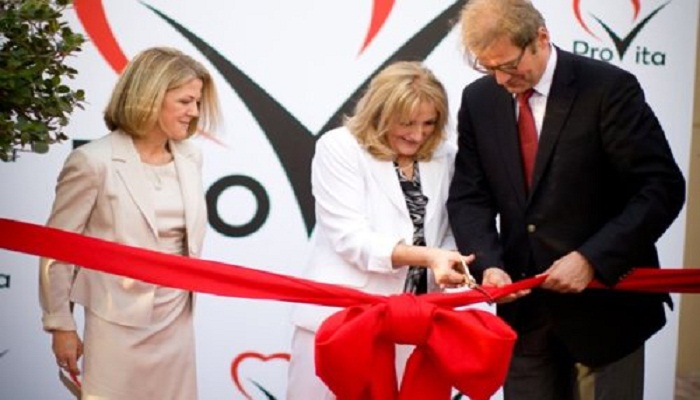 UAE, 12th October 2011: ProVita International Medical Center in Abu Dhabi has today been officially inaugurated. The facility is the first of its kind in the MENA region to provide long-term care for acute, ventilator dependent patients in a non hospital setting. Chairman of the Board Dr. Helmut M. Schuehsler, who is the Chairman & CEO of ProVita’s initial investor, TVM Capital MENA, thanked the Abu Dhabi Health Authority for its support in launching the groundbreaking facility which has a capacity of approximately 40 beds, with internationally trained staff specializing in ICU care. Magi Livardis, General Manager of ProVita said, “The last few months have been very exciting and rewarding for the whole of the ProVita team who have worked tremendously hard to ensure that our patients and their families have the best standard of care and rehabilitation possible. Our staff and physicians are providing excellence in clinical practice and dedication to quality for those patients who require the highest level of medical and nursing care in a non-hospital setting.” Added Dr. Helmut M. Schuehsler, “We are proud of the work that ProVita has been able to do and the difference it has made to the quality of life of severely ill and ventilator dependent patients in Abu Dhabi. The facility is a first for the region and a testament to the growth and development of the local healthcare industry. The regional demand for long-term care remains high and we hope to find enough demand for this service in neighboring countries so that we might be able to expand the ProVita offering to other countries in the future.” ProVita is a portfolio company of TVM Capital MENA, the first international private equity house with a focus in healthcare to establish operations in the MENA region. The genesis of the clinic, and more specifically the collaboration with the founder of ProVita clinics in Germany, Christina Shawky-Boehme, is consistent with the TVM Capital MENA strategy of involving leading operators from more fully developed healthcare markets such as in Europe or North America to provide unique and specialized healthcare services in the Middle East, directly catering to the growing local demand. The investment in ProVita was originally announced in November 2010 and the facility was opened in February 2011. The company hopes to meet enough demand in other countries to be able to open additional long-term care facilities in the region, including the Kingdom of Saudi Arabia. -ENDS- For press information contact: The PR Company Samantha Armstrong +971501582958